Climate Change
All things, great and small
Overview Protect Natural Spaces Protect Plants Protect Animals What it is Why it's important Where we are Where we need to be How we get there Where we've been News FAQ Repair Damage

We haven't been particular good about caring for the other animals we share the natural world with, despite how much we rely on them. The extinction rate is 1000 times higher than the estimated rate from before human influences. We have, however, had a few success stories in our history as we have tried to make efforts to lower this number.

We have done a good job of keeping some animals from going extinct
We have been protecting more spaces to provide safe havens for animal species all over the world. There have been attempts all over the world to legislate protections for particularly threatened animal species. This began in the early 1970s, when the US Endangered Species Act and the Convention on International Trade in Endangered Species of Wild Fauna and Flora (CITES) were passed. 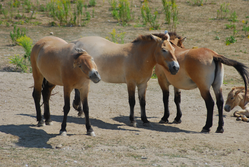 The Przewalski Horse is the only horse species to never have been domesticated. It almost went extinct in the 20th century, but was successfully saved.Credit: Wikimedia Commons
Even before these protections, however, we have done a good job of keeping some animals from going extinct. For example, bison were nearly extinct around the turn of the 20th century until a group associated with the Bronx Zoo worked with the Federal government to reestablish herds on protected lands. Another great story is that of the Przewalski horse, the only non-domesticated horse species left in the world. It was once extinct in the wild, but a few individuals were captured by the Zoological Society of London and Mongolian scientists, which were bred and eventually rereleased into the wild. As of 2005, there were about 250 of them in the wild, all of which are descended from those held in captivity while the wild population went extinct.
Even more: News and the FAQ
TIME Magazine - The New Age of Extinction
Article on the dangers and problems associated with the current extinction rate. Published in the April 13, 2009 print edition.
Click now to view
American Bison Society
Timeline of the American Bison.
Click now to view
Wikipedia - Przewalski Horse
Wikipedia article on the Przewalski horse.
Click now to view

Tomo Says:Sometimes, I like to put on a lei, and walk around the house for hours.
Feedback/Bugs