Last week, we compared microwaves and toaster ovens. But clearly, not everything can be made in one of those two! So, continuing in the cooking theme, this week's showdown takes a look at your stovetop - gas vs. electric burners to see which wins out. 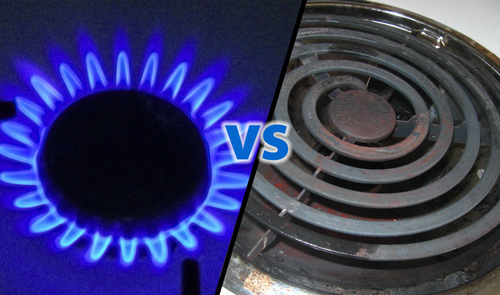 
Let's start off being clear - not many people are currently in the market for a new stove. However, given that cooking is a significant fraction of all household energy usage, when the time comes, it's a good idea to find the most sustainable choice for your household.

We'll evaluate gas vs. electric burners much in the same way as we did propane vs. charcoal - the big things we're looking for here are energy usage and CO2 production. For each, to make a decent estimate, we'll look at the time it takes to boil a half-gallon of water. While this isn't cooking food, it provides a good baseline that approximates many cooking tasks. We'll also evaluate three types of cooktops - gas burner, electric coil, and electric induction. One caveat: the only good numbers we could find are provided by various induction stove manufacturers. As such, take the induction data below with a large grain of salt. If someone knows of better numbers, please let us know in the comments, and we'll update the showdown!

The table below shows power used, time needed to boil, and total energy consumption for each.

Induction comes out the clear winner in energy usage, but that's not the end of this story - there's also the matter of CO2. CO2 production will largely depend on where your power comes from, and we'll take a closer look in the Fine Print.

How much CO2 is made when my electricity is created?
This is largely a matter of where you live, and if you've chosen to get some or all of your power from renewable sources. If you live in the United States, the EPA has a great online tool that can tell you the the mix of where your power comes from.

This mix varies quite a bit depending on where you live - the table below shows some examples.

It's important to note that you're not completely stuck with those numbers. Many power companies offer you the option to use renewable sources of energy at a small premium. In Portland, for example, the SixLinks household of three switched to 100% renewable energy for about $6/month. This will vary by your power company, but it's usually an option.


Ok, so let's assume I have an average mix. How do these three look on CO2 production?
Now that we know the energy usage, and the mix of where your energy comes from, we can use research from the US Department of Energy to figure out how much CO2 is produced. For gas, based on a few different sources, our calculations assume 12 pounds of CO2 per therm of natural gas, or about 0.41 pounds of CO2 per kilowatt-hour.

For electricity, as usual, it depends on where you live. Here's how many pounds of CO2 are released for every kilowatt-hour of energy produced in a few cities:

And here's the big, important numbers, how much CO2 we produce in boiling a half-gallon of water:

As you can see above, a gas stove wins out across the country. However, there's an exception. If you've purchased 100% renewable power from your power company, your CO2 emissions are zero with either electric option - and that's the best case scenario. So, if you know you're going to stick to 100% clean power (a good idea for a wide variety of reasons), an electric induction stove is your best option.


So what are these induction stoves anyway?
Induction stoves can sort of be thought of as the microwaves of the stovetop. They work by using magnets to heat the iron in your cookware directly, saving a lot of energy usually wasted on heating the air and cooktop. In fact, when you pull off the pot, induction stovetops are immediately cool to the touch, since there's no heating element on the surface! They've been around for a number of years, but lack of knowledge and higher cost has kept them constrained to a more limited audience. They're now gaining traction in the marketplace, for their increased safety and efficiency.

Gas Stove. That's unless you'll have 100% clean energy for a decent portion of the life of your cooktop. Then, an induction electric's the way to go!

This one can seem a bit tricky, as gas stoves ultimately end up using more power, but that power usage is trumped by the higher CO2 emissions of electric stoves, even on relatively 'clean' energy supplies like New York and Portland's. So years from now, when you're looking to replace your stovetop, take a look at your energy supply, consider renewable energy, and make the most sustainable choice for your situation!