This section covers everything that you plug into your outlets. You can probably name a few things that are plugged into the walls in your home right now, but I bet you don't know just how much energy each and everyone of them are consuming all the time. You can divide the things that are plugged into your outlets into three broad categories: active loads, continuous loads, and hidden loads.

A lot of devices are given things like clocks that we don't use
Active loads are things that you actively turn on and off throughout the course of your day. This includes things like lights, computers, television, and the microwave. These are often big consumers that are only on a part of the day. You may be shocked to learn just how much energy these appliances use, so it is important to learn about them and keep it in mind every time you turn one of these devices on. These loads are fairly easy to reduce simply by using less of these appliances. This is where the action of turning off lights and television and everything else when you leave a room can save a lot of energy. 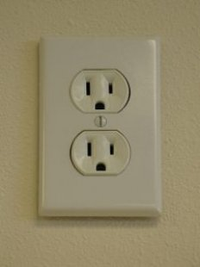 This section covers all of the things we plug into these.Credit: stock.xchng
Continuous loads are things that are on all the time and that you may often forget about because you don't turn them on and off. A major example of a continuous load is the refrigerator. A laptop can also be a continuous load if it is always on. The energy usage from continuous loads add up quickly because the device is consuming power 24 hours a day. These are the sorts of devices where efficient operation and buying high efficiency appliances is very important.

The third category is hidden loads, also known as parasitic or phantom loads, these are things that are consuming electricity when you don't know it, when they are supposed to be off. That clock on your microwave or DVD player or coffee maker is a great example. Another good example is the television. A lot of devices are given things like clocks that we don't use or are kept in a stand-by state so that they turn on faster. These are 24 hour a day loads that aren't actually performing much of a service and can be low hanging fruit for energy reductions.

A final component of reducing electricity usage is knowing just how much power you are consuming and where it is going to. Knowing this information will help you make more informed decisions. Even better though, is having this information available in real time, which is where devices called feedback monitors come in. These report your real time energy usage and allow you to go through your house trying to use as little energy as possible.

Tomo Says:A lot of people put bumperstickers on their cars. If you're one of them, you're gonna want a SixLinks bumpersticker.
Feedback/Bugs