Petroleum fuels were not always the fuel of choice for transportation, but became the desired fuel over time. Below is a brief history of the means by which automobiles have acquired their energy for propulsion.

Gasoline was loud, dirty, expensive, and required cranking to get started 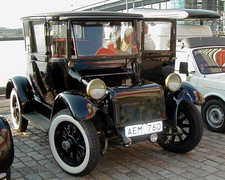 A 1919 Detroit Electric. At the turn of the century, there were more electric cars made than gasoline-powered ones.Credit: Wikimedia Commons

In 1900, American car companies made 1,681 steam, 1,575 electric and 936 gasoline cars. A poll conducted at the first National Automobile show in New York City found attendees favoring electric, followed closely by steam. at one point there were 50,000 electric vehicles on the roads. Gasoline was loud, dirty, expensive, and required cranking to get started. However, inventions such as the muffler, electric starter, and cheaper ways of producing gasoline caused it to overtake electric and steam.

Decades ago we realized that perhaps the fuel was a little dirty and that we could eventually run out of it, so alternatives were discussed, such as solar power, hydrogen, electricity, compressed natural gas, liquid petroleum, etc. but never really took off, so instead standards were implemented to try to make vehicles slightly more efficient and the fuel slightly cleaner. Then, recently, the world has begun to realize just how expensive and unsustainable this behavior is and that something needs to change now, which is how we got to Where We Are.
Even more: News and the FAQ
Wikipedia - Automobile
Wikipedia article on the automobile
Click now to view
Renewable Energy World - Geothermal
Impact of Iceland's geothermal electricity source on its economy.
Click now to view
Hybrid Cars - History
History of hybrid vehicles
Click now to view
California Energy Quest - Electric Vehicles
California page for the Student's Guide to Alternative Vehicles.
Click now to view

Tomo Says:Did SixLinks help you out? Return the favor by becoming a supporting member!
Feedback/Bugs