Climate Change
Getting around has nothing to do with polluting.
Overview Drive Less What it is Why it's important Where we are Where we need to be How we get there Where we've been News FAQ Electric Cars Better Batteries Charging Stations Biodiesel

How we get there

There are a number of ways that we can encourage situations that make it easier to drive less, but ultimately it's up to you. Click on the Do Things tab to learn more about how to drive less, connect with those working to do the same thing, and begin making real changes in your life.
Ultimately, the decision on how much you drive is entirely up to you

There are a number of programs and policies on government, community, and workplace levels that would make it easier or more advantageous for people to drive less. 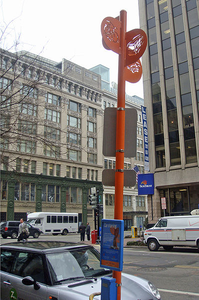 Car share programs such as this one are just one of the many things that can be implemented to help people drive less.Credit: Wikimedia Commons

It's Up to You

Ultimately, the decision on how much you drive is entirely up to you. Before you get into your car, think if the trip is really necessary or if it could be consolidated with other trips later on. Debate whether you really need to drive or if you can walk or bike. When going out in large groups, how many cars do you really need to take? Rethink your commute, do you have to drive the whole way by yourself or can you walk, bike, take public transport, or carpool? Use resources such as this one to find public transportation resources in your community. Make it a goal of yours to go as long between trips to the gas station as possible. Not only will it reduce your personal greenhouse gas emissions, but it will also save you money. This is one of the biggest things you can do in your day to day life to minimize your negative impact on the world. Get changing.
Up next: Where we've been

Tomo Says:SixLinks has changed a lot over its life. As good parents, the guys keep around the icons they couldn't use anymore in the icon pasture. (Actually, Jeff just agreed to this to keep Steve sane.)
Feedback/Bugs