Odds are pretty good that sometime in the last week, you visited your local bank to deposit or withdraw money. Or maybe you made a payment on a mortgage, auto loan, or student loan. There are many millions of people throughout the world who do not have access to any of these services. Microfinance is the attempt to get traditional financial services to the very poor of the world. It is an attempt to replace or work with informal financial services that tend to be riskier, more costly, and at times predatory.

It is important to not confuse microfinance and charity 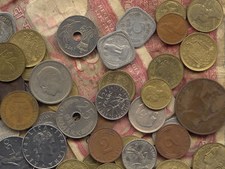 This section deals with having access to money and a safe place to keep it.Credit: Wikimedia Commons
It also seeks to replace charities that grant loans and grants. Microfinance is something that gives "poor people a 'hand up', not a 'hand out'" by expanding available financial services, increasing the number of financial institutions available to the poor, as well as increasing the capacity and diversity of those institutions. It is important to not confuse microfinance and charity, charity is better suited for situations such as war zones and natural disasters, where it is unlikely for people to be able to generate the cash flow required to repay loans. This occurs by scaling down traditional systems that we take advantage of every day and getting them to function in places where the currency trades for a fraction of the US dollar. These are places that have until now been left out of the global market because large financial institutions can make more money with fewer Americans or Europeans.

You may not even realize the number of financial institutions you rely on and the role they play in your life, so we've provided as list:
Up next: Why it's important
Wikipedia - Microfinance
Wikipedia article on Microfinance
Click now to view

Tomo Says:I've never been to Spain, but the rain in Portland falls mainly on the yard.
Feedback/Bugs