We have been using wind turbines for long before Don Quixote started chasing them. Humans long ago realized that they can harness the energy of the wind to do work, first with sails, then with wind turbines. They have been used since as early as 200 B.C. by the Persians and also by the Chinese. The first confirmed practical windmills, however, were made in the 7th century in Iran and were used for grinding grain and drawing water. In the 14th century, the Dutch had installed a number of windmills for draining the Rhine River delta. The first wind turbines used for producing electricity were in the UK in 1887 for recharging batteries. 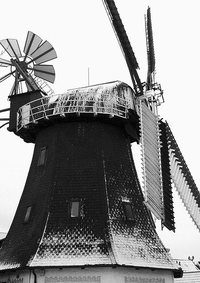 Historical windmill from Germany.Credit: Everystockphoto.com
Windmills were used all over the world throughout the early 20th century in areas that had large, disconnected populations. However, with the spread of centralized electrical systems that ran cheaply off of fossil fuels, the demand for wind turbines decreased. They continued being used for water pumping, but were mostly used in remote areas where it was too expensive to extend the electrical grid.

Research was continued nonetheless, and when interest was revived in the 1970s as a result of the energy crisis, there was a solid foundation of research on which to build. Along with most renewables, effort made in the 70s was mostly lost until the last decade when acknowledgment of the harmful effects of fossil fuels became widely accepted. Since then, the wind industry has been experiencing sustained and fairly rapid growth.