There is some good news and some bad news with regards to the current state of wind power around the world. The good news is that there has been a recent push around the world to install more wind power. It is currently cheaper than solar energy and still has the advantages of being able to be used in many areas, to provide fairly consistent energy, to remote regions as well as to the grid as a whole. The cost of wind power is in the same range as that of coal and natural gas, and is likely to remain more stable in the future.

This is a number that needs to start getting big quickly 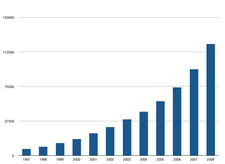 Global installed wind capacity in MegaWatts (MW).Credit: World Wind Energy Association February 2009 Report
The wind energy capacity of the world increased in 2008 by 29%. The United States has overtaken Germany for the most installed capacity in the world and China has more than doubled their capacity for the third year in a row. There are a number of countries for whom wind energy provides over 20% of the energy produced. Overall, wind energy is undergoing a great amount of growth. This is all great news. The bad news is that even with this growth, wind energy only accounts for 1.5% of global energy production. This is a number that needs to start getting big quickly.