How we get there

There are a number of things that need to happen for wind to become a very large portion of the world's energy supply. Smart grids need to be implemented that will intelligently handle dynamic energy supplies from sources such as wind energy. Also helpful would be large scale storage systems to take up excess energy when there is large amounts of wind blowing, which would in the end lower the total capacity of energy supplies needed. You can learn more about these technologies in the Storage and Smart Grid sections of this website. Also helpful would be a price on carbon through a carbon tax or cap and trade system that took the true costs of dirty technologies like coal into mind. You can read more about this on the Cap Carbon section. The biggest things that needs to happen, however, is that we need to actually install a lot more wind turbines.

"Would I rather a wind turbine, a coal plant, or a natural gas plant near my house?" 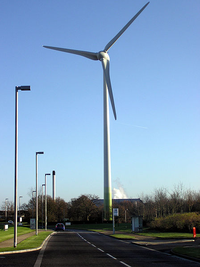 Wind turbine near Reading, Berkshire, England. The turbine supplies up to 1,500 local homes and businesses.Credit: Wikimedia Commons
There is some controversy over implementing wind turbines, however, with a number of NIMBY (Not In My BackYard) type arguments being made. The resistance that is put up to having any power source within sight needs to be overcome. We as a world are going to need more energy than we currently produce, meaning that new power plants will need to be constructed. The question should not be, "Do I want a wind turbine near my house?", but instead "Would I rather a wind turbine, a coal plant, or a natural gas plant near my house?". There are also often concerns with noise levels and any negative impacts tall turbines may have on bat and bird populations, which we address below.


The Truth about Birds

Wind turbines got a bad name early on due to their impact on bird and bat populations. Some of the first wind turbines installed were installed without taking into account natural populations and migratory routes. They also had no safeties built in to attempt to avoid bird impacts. These issues are now taken into consideration with new installations and government agencies have been given power to ensure no major consequences through the Migratory Birds Act and the Endangered Species Act. This is an issue where there can always be improvement through better collaboration between system designers and wildlife biologists, but is not an issue so large that it should discourage any wind energy development.


The Truth about Noise

One of the other concerns with wind turbines is the noise they produce. At a distance of about 1000 yards, this sound is about that loud as background noise in a quiet bedroom.

Tomo Says:Sometimes, I like to put on a lei, and walk around the house for hours.
Feedback/Bugs