You've pulled some leftover mac n' cheese out from the refrigerator, glance over at your counter, and see a microwave and a toaster oven. Which do you toss your plate of pasta into, if you're looking to be the most sustainable? 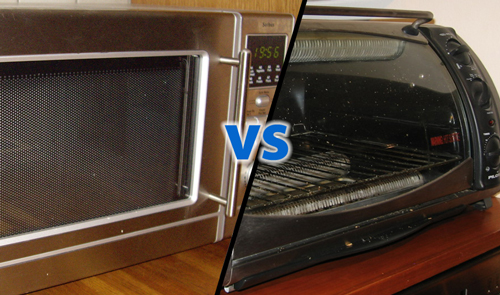 
The biggest sustainability concern in this case is energy usage, and the microwave wins out handily over the toaster oven. The best news is that you can easily verify this in your own home. Most microwaves and toaster ovens have the wattage they use printed directly on them. That number is pretty close to the actual power each device pulls. So, if you have an 1200W toaster oven and a 600W microwave, your microwave is generally using about half of the power of your toaster oven.

We've run some numbers for a few common meals, assuming you have an average microwave and toaster oven. Our cook times are based on either the packaging, or the exclusive expertise of Steven's mom. Other folks have found similar numbers.

But, as always, there's more to the story than that. That's why we have the fine print!

Just how do microwaves get away with cooking faster, with less energy?
It seems like cheating, but it's true. The biggest difference is the types of radiation that each uses to cook food. Toaster ovens use infrared radiation, or heat coming off those glowing heating elements. While this does a good job of heating the food, it also heats the air in the oven, the toaster oven itself, and the room around it. Anyone who has touched the top of a just-used toaster oven can attest to that fact!

It's also important to note that microwave and infrared radiation have nothing to do with nuclear radiation, which can be dangerous. When your microwave and toaster ovens are off, they produce no radiation at all. Microwaves produce their electromagnetic radiation in much the same way as a fan turns electricity into the movement of its blades - there is nothing inherently dangerous happening!


What about disposal, when the appliances no longer work?
From what we could find, both microwaves and toaster ovens are 100% recyclable when disposed of properly. Both appliances break down into various metals, plastics and glass that can be fairly easily reused. Check out Earth 911's great recycling guides for where you can recycle yours. In terms of creation, microwaves look to be a bit more intensive to make, but that difference is more than offset by savings in usage.


Surely you don't mean to suggest I should make toast in the microwave.
Surely not. If you want a crisp crust of any kind, you'll need to expose your food to infrared radiation, like that from a toaster or pan. But for everything else, your microwave's likely an option, and could save you some energy!

Microwaves are often thought of simply for reheating, but can also be used to prepare food, including everything from rice to hard-boiled eggs, and a whole lot more.

There are a few other ways to save a significant amount of energy when using either or both appliances.

Power Strip
Place both your microwave and your toaster oven on a power strip, preferably one that you'll notice is on! Since many more advanced versions of each include electronic clocks, timers, and circuits, they pull power all the time, even when you're asleep and there's nothing to cook. Putting all your devices on power strips is a great way to stop that waste of electricity, and on average, saves about 10% of the power you microwave or toaster oven uses over its life.

Defrost
This one's not immediately obvious, but makes a lot of sense. For larger frozen items, defrosting first can save as much as half the cook time - adding up to a whole lot of energy saved! The chart below shows the energy usage for baking a large frozen lasagna, frozen and defrosted.

Combine Microwaves and Toaster Ovens
This is a particularly effective way to cook, and get the best of both worlds. You can heat your meal mostly in the microwave, then transfer it to a toaster oven for the last minute or so, to get the crisp crust, potato skin, or tortilla that your taste buds request. If you've got both appliances, it doesn't have to be one or the other. Be creative, and try out new ideas!