Being a hygiene-conscious person, after using the restroom in some swanky restaurant, you wash your hands. Looking over, you see a rack of paper towels and an electic hand dryer. The green part of your brain now has a conundrum. Paper towels are from trees, and could be produced sustainabily, but the hand dryer's not filling up the landfill. And then there's energy. Your hands are wet! What's the best choice? 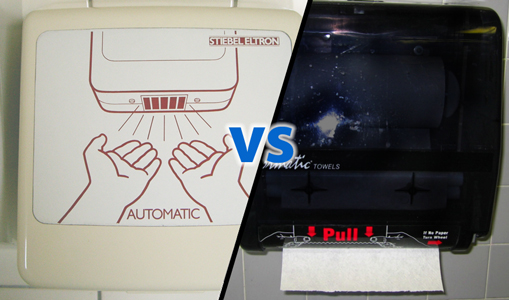 
There are two good studies comparing electric hand dryers and paper towels. Both found similar conclusions, and in both, electric hand dryers came out ahead. The discussion of one study had a good rebuttal from a paper science professor at the University of Washington, which we'll address down in the fine print.

First off, let's address one common misconception: for the most part, nobody's cutting down trees just for paper towels. Most paper towels you find in public bathrooms are made from recycled paper, and even those that aren't are made from industrial waste created in the manufacturing of regular paper.

Now, let's talk about the studies. Both followed what's called "life cycle analysis" (LCA), which means that they looked at the entire energy and waste for a product, from start to finish. So, for paper towels, they start in a forest with logging, include processing transport, usage, disposal, and degradation in a landfill. Analysis of the hand dryers includes creation of the dryer, electricity usage during use, and disposal.

The reason hand dryers came out ahead ended up having surprisingly little to do with the actual act of drying your hands. Most of the emissions and contributions to greenhouse gases come from decomposition of the towels in a landfill. The graph below shows the breakdown for paper and hand dryers. 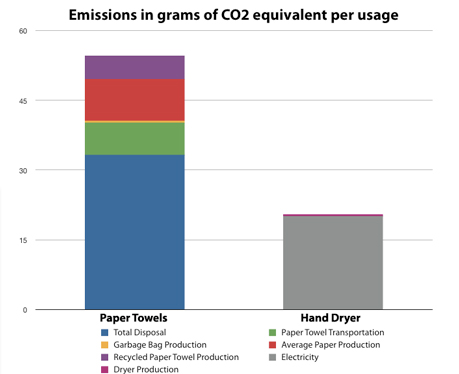 It also turns out that paper's particularly tricky, as there are a number of different types of paper and processes used to create it. Since hand dryers came out ahead, we used the most ecologically friendly sort of paper studied, to be in the safe side in all of our calculations.

Climate Conservancy Study
This study, published by Salon, looked at the electricity usage of the electric hand dryer and the logging, recycling, and processing of paper, as well as the manufacture, transport, and disposal of garbage bags for the paper towel system.

For energy calculations on the electric hand dryer, the study took into account two different wattages of hand dryer, an average electrical grid, and 30 second or one minute run time. For paper production, generic emissions values based on the whole paper industry were used. Similarly, average energy per dollar cost data is used for garbage bag production, paper towel transport, and waste disposal. Waste disposal is calculated purely based on cost per weight and emissions per dollar of disposal. It was assumed that 2 paper towels constitute one use.

These results showed that depending on the dryer used and its run time, the emissions were anywhere between 9 and 40g CO2 per use (9-20 for 30 seconds, which is one button press). Using two paper towels emitted 56g CO2.

Environmental Resources Management Study
The second study was conducted by Environmental Resources Management. It's important to note that the report was commissioned by a manufacturer of electric dryers. However, the study was done by an independent third party and arrived at similar conclusions to the study done by The Climate Conservancy, so we include it for completeness' sake.

This study was similar to the Conservancy study, but also included materials for the dryer, the paper towel dispenser, and the garbage bin. It assumed 500 uses per week, a 5 year lifespan for both systems, and a 30 second run of the hand dryer vs. 2 paper towels.

It looked at 4 different sets of paper towel data, one from the SCA Environmental Report and 3 from PEMS4: bleached paper, unbleached paper, and ETH paper (the type with the lowest emissions). The report judged the two systems in Non-Renewable Resource Depletion, Global Warming Potential, Acidification, Ecotoxicity, Human Toxicity, Nitrification, Ozone Depletion, and Smog. The electric dryer system won out in all categories except Resource Depletion (paper is considered a renewable resource).


Recycling Rebuttal:
Professor Lewis pointed out a flaw in Climate Conservancy study: the authors did not account for the emissions saved by using recycled paper and industrial waste to produce the paper towels. This omission does skew the results, but can we can account for it. Since using recycled raw materials to produce paper saves about 60% of the energy needed (according to the US DOE), we can simply discount the energy used in production by 60%.

Accounting for this improvement, when looking at Global Warming Potential, the dryer still beats out the best paper system by better than 20%.

Like all life-cycle analyses, this one's a bit messy, but no studies appear to support the use of paper towels over a hand dryer. Even in the best paper cases, hand dryers come out ahead. To top it off, if a business uses 100% clean energy, the impact and emissions from a hand dryer become a orders of magnitude better than those for paper towels.

So the next time you're standing with drippy hands and a dilemma on the wall, you can choose the hand dryer, and let the green part of your brain breathe freely.


That's this week's showdown! Share your thoughts below, and if you have ideas for future Showdowns, let us know!
Update: Fixed the link to second study.