Over the last dozen years, our energy usage has moved upwards at a rather steady rate in terms of both total energy usage and in terms of energy usage per household. This is a result of generations of the mindset that energy is cheap and abundant and that we can use as much of it as we need to. This increases have occurred as the cost of electricity has also gone up, increasing the amount of money we are spending on electrical consumption. The graphs below show these increases for all residential energy usage, not just for those devices plugged into your walls, but it shows the trend that we must work to reverse.

Fortunately, there has been a recent push for making more efficient appliances 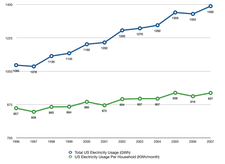 US electricity usage has not only been going up in absolute terms, but also per household.Credit: US EPA
This is why, despite there being increases in capacity of clean energy sources installed, we are still needing to build more coal and natural gas plants. We need to get our electrical consumption under control so that clean energy sources have the opportunity to catch up and contribute a large percentage of our energy needs.

Fortunately, there has been a recent push for making more efficient appliances. The Energy Star program has been especially effective for promoting the most energy efficient appliances of certain types on the market. This government program rates the efficiency of appliances and gives their star to those that are a certain level below average consumption for comparable devices. Unfortunately, with increases in efficiency, we have also apparently been putting more devices in our home and using them more often, because usage keeps going up. Another potential reason for this increase is that the things that we get keep getting bigger. Even an efficient 60 inch TV is going to take more energy than a less efficient one half the size. We need to take control of our electrical usage and stabilize and then reduce the energy we use day to day.


Even more: News and the FAQ
Energy Star
Description of the US Government's Energy Star program
Click now to view

Tomo Says:If anyone wants to know, grass is tasty. That's why we dogs eat it sometimes. No other reason. Just tasty.
Feedback/Bugs