Climate Change
Less turkey, more mashed potatoes
Overview Eat Less Meat What it is Why it's important Where we are Where we need to be How we get there Where we've been News FAQ Save Money Your Thermostat Your Outlets Your Stuff

While millions of people are happily vegetarian, it's clear that not everyone wants to go veggie. However, simply reducing the amount of meat we eat can dramatically help the world. In the future, we will hopefully see cuts in the amount of high energy meat eaten and more in the way of meat alternatives, more intelligent and sustainable means of producing high energy meat, and a general movement towards lower energy meats in daily lives. 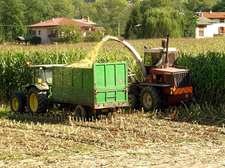 If we just ate the grain products that we feed to livestock instead of the livestock themselves, we wouldn't need to grow nearly as much.Credit: Wikimedia Commons
Unfortunately, the process of producing meat has certain physical limitations that are going to be impossible to overcome. There may be better ways to produce energy, but there is no way eating beef is ever going to be on even nearly the same level as getting your protein from chicken or vegetables. This is one energy issue that can not be fixed by increased efficiency alone and will need to rely on conservation of energy by making better decisions.

We will hopefully see reductions in the amount of grain that goes to livestock, the percentage of total food energy consumption that meat represents, and the total amount of water and energy lost in the process of producing meat. It's not that the burger is dead, it's that we need to learn to do without them as much as possible, to get the vast majority of our proteins from vegetables and some lower energy meats.

Up next: How we get there