The car's here and it's not going anywhere soon. What will change is the fuel that powers our cars, trucks, buses and tractors, as well as how much we use them. Getting around wastes a lot of energy, contributes to climate change, and produces many toxins. Transportation produces a large amount of the emissions that contribute to climate change. It is so large a portion of these emissions, in fact, that even if we were to have more efficient buildings, clean energy, and reduced energy usage, we would still likely experience climate change if transportation remained unchanged. Each of these areas must be addressed together in order to avoid major problems from climate change. 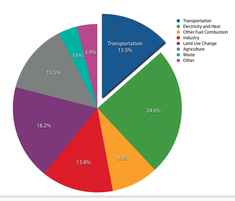 Transportation accounts for over 13 percent of global greenhouse gas emissions.Credit: World Resources Institute
This is probably one of the most important sections because it requires the a large lifestyle changes for those who are already dependent on gasoline and diesel consuming cars and because there are billions in the world who are about to becoming car owners. This is one of those areas where we have to look at our lives and realize that there is more to be done to help avert climate change than simply installing some CFLs.

We are always going to need to get places, but we need to find ways to get around that do not emit CO2 and other greenhouse gases. If you want to know more about why CO2 and climate change is such a problem, check out the Climate Change section. There are also a number of other toxins emitted by burning fossil fuels for transportation in addition to CO2. Sulfer oxides (SOx) contribute to acid rain production, carbon monoxide (CO) is a dangerous molecule to breathe in in large amounts, and nitrous oxides (NOx) and unburned hydrocarbons both contribute to smog production.
Up next: Where we are

Tomo Says:A lot of people put bumperstickers on their cars. If you're one of them, you're gonna want a SixLinks bumpersticker.
Feedback/Bugs