Where we are with the state of transportation is pretty much what you'd expect. Most people get where they're going by using pretty inefficient gasoline or diesel powered vehicles, emitting CO2 into the atmosphere and contributing to climate change. In some areas with high population densities, people rely on mass transit or walk or bike, but for the most part, we use fossil fuels in an inefficient manner to get around.

Transportation currently accounts for 28% of US total energy usage 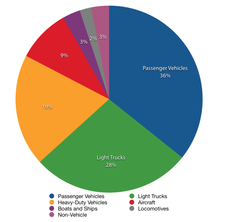 The majority of this 28% of US energy usage comes from passenger vehicles and light trucks that most of us drive everyday.Credit: US EPA
With recent increases in gasoline prices and an acknowledgment of the need to do something about climate change, we have begun focusing on reducing emissions from transportation. Some fleet and transit vehicles have started using alternative fuels, such as biodiesel. There has also been a push for more plug-in hybrids and more efficient vehicles on the roads. This is a good start, but we are still at a point where people don't think about the effects of getting into the car and where hybrids are still seen as trendy.

Transportation currently accounts for 28% of US total energy usage. Of this, 62% is gasoline, 24% is diesel, 8% is jet fuel, 4% other, and 2% natural gas. Below you can see some graphs (coming soon!) on the energy usage of different types of vehicles, the current state of mpg standards, and just how much driving we do.

Up next: Where we need to be

Tomo Says:Tummy rubs are the best thing ever. Seriously.
Feedback/Bugs