Climate Change
Getting around has nothing to do with polluting.
Overview Drive Less Electric Cars What it is Why it's important Where we are Where we need to be How we get there Where we've been News FAQ Better Batteries Charging Stations Biodiesel

Hybrid electric and full electric vehicles have a long history, actually being preferred to gasoline vehicles until Henry Ford overcame some of the difficulties with gasoline powered vehicles. Electric vehicles date back to the 1830s, and picking up popularity in the later part of the century. We have even had hybrids where gasoline charges a battery, powering electric engines, since 1898, when they were built by Porsche at age 23. Porsche's vehicle could go 40 miles on battery alone. By 1904, there were approximately 6000 electric vehicles produced in a year. 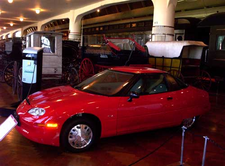 The GM EV1 was part of a series of electric vehicles released in the 1990s. They were then taken back and destroyed at the end of their leases.Credit: Wikimedia Commons
It took until 2004 for the Prius to win Car of the Year Awards from Motor Trend Magazine and the North American Auto Show, at which point hybrids began to become more popular within the US. Throughout the first decade of the 21st century, more and more manufacturers began announcing basic hybrids of popular vehicles, as well as plug-in hybrids to be released starting in 2010. During this time, there began to be an interest in high end full-electric sports cars as well, with the Tesla being the most visible of these vehicles.

The EV1 electric vehicle by GM has been the source of much controversy regarding major auto manufacturers and green car enthusiasts. There are those that claim that the EV1 was designed to fail to quell interest in electric vehicles, among other conspiracy theories. There has, in fact, been a documentary dedicated to the story of this vehicle called Who Killed The Electric Car?. We felt as though this would be a good place to address one of the larger stories regarding the history of electric vehicles.

In response to a strict piece of legislation mandating electric vehicles in California, a number of automakers introduced full electric versions of some popular models. While popular among some initial adopters, there were never more than a few hundred drivers of each model, primarily due to their high cost. When California repealed the legislation, most of the vehicles were collected at the end of their lease dates by the manufacturers and destroyed, although Toyota still provides support for their RAV4 EV.

The technology, especially battery technology, was not mature enough at this point for the vehicles to be widely cost competitive, so they were discontinued. As for why the vehicles were collected and destroyed, GM's response is that it was due to liability issues, although there are many who debate that this is the whole truth.

Tomo Says:I've never been to Spain, but the rain in Portland falls mainly on the yard.
Feedback/Bugs