We are losing species and spaces that we will never be able to get back at a rate never before seen due to neglect, carelessness, and active destruction. Extinction is normal. Living things disappear all the time and it's a good thing, it's a part of the natural process. The problem is that extinctions usually occur at a pretty slow pace, allowing time for new species to evolve to take the place of old ones. Humans in the last few hundred years have become too large and disruptive of a force in this natural process, speeding up the extinction rate to a dangerous level. Sure, the world will always recover somehow, but the question is what will our quality of life be like
Deforestation is not only damaging natural spaces, but is also contributing to Climate Change

One of the largest problems we currently face with protecting spaces is the threat and reality of climate change. The climate is changing faster than species can adapt to it, and while some can just move to new areas, many others are stuck where they are. This is connected to the problem of man/nature barriers, where humans are expanding into new natural areas and nature is expanding into areas taken over by humans due to climate change. These interactions are causing new conflicts. 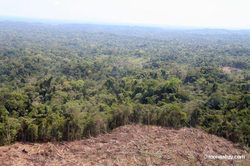 Deforestation is a huge problem to both nature and climate change.Credit: Mongabay.com
Another major issue is simply expansion of human influences. We are building our cities bigger, consuming more resources, cutting down more forests, using more water, all things that put stress on the rest of the natural world. We are also emitting more pollution, CO2 and otherwise. Deforestation is not only damaging natural spaces, but is also contributing to Climate Change, which then causes more damage.

There is a great deal of reason to be hopeful about our chances of preserving much of the natural world if we decide to make a conscious effort to do so. There are two recent examples of man-made natural problems that we have worked very well to fix: Acid rain and Ozone Depletion.

Acid rain is caused by sulfer oxides (SOx) in the air from dirty industrial processes. It results in acid rain which can damage forests and crops and pollute bodies of water. Through regulations and taxing of these emissions, acid rain has become a much smaller issue than it was only a couple decades ago.

Ozone depletion was caused by chemicals called Chloro-Floro Carbons (CFCs) that were found in most aerosol sprays. These chemicals reacted with ozone to deplete it. While ozone at ground level leads to smog, high up in the atmosphere, it is important for keeping out UV light, the same sort of suns rays that cause sunburns. Through regulation of these chemicals, this has become much less of a problem.
Up next: Where we need to be

Tomo Says:Did you know that you can search all of SixLinks.org by using the