The electrical grid was first started to be formed in 1896, based on plans by Nikola Tesla created in 1888, which beat out Edison's plan for a direct current electrical grid. Aspects of Tesla's plan were demand-driven control and centralized, unidirectional transmission. While technologies have changed, and our usage has certainly changed, the principles of the grid have not. This is mostly due to a reluctance by utility companies to invest in changing what has worked for so long. This original grid was designed at a time where there was abundant energy and it was more a problem of getting this energy to where it needed to be. This is not the same type of system that we need today. 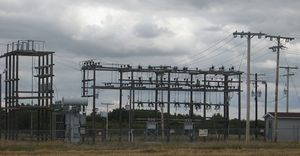 This is more or less the same technology that we have been using to power our cities for over a century.Credit: Wikimedia Commons
Some intelligent meters have been installed in the last couple decades that keep track of when energy is being used, but there hasn't been any attempt to alter the actual grid until very recently, and even then, in only a limited number of areas. This is despite the fact that the technology that we need for the smart grid has existed for a number of years. The basics of smart meters have existed for 10 or 20 years, while the advanced communication aspects became possible with improvements in computing and internet technologies that have taken place over the last 5 to 10 years.

Tomo Says:Have you ever sniffed a dog's butt? No? Why not? It's awesome!
Feedback/Bugs