In the future, our electrical grid will be able to determine how much energy is needed where and when, it will (within reason) dynamically price based on supply and demand, and it will give feedback to the utility grid about when infrastructure is being stressed or has gone offline. This will be a part of a future that includes smart grids transporting energy from clean, renewable energy sources, to smart homes that intelligently use as little energy as can be reasonably expected. These homes will also need to be equipped with Electric Cars and energy efficient, smart appliances that can communicate with the grid to allow for even more efficient operation. 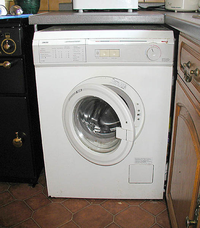 Eventually, a smart grid may be able to communicate with appliances such as your washing machine. This would allow you to set the machine to run when energy demand is low and electricity is essentially on sale.Credit: Wikimedia Commons
Although estimated at a cost of $200 to $800 billion for the US alone in total equipment upgrades, the smart grid could save over $100 billion in new power plants and transmission lines over the next 20 years. In addition, it is estimated by some that faults in the current grid cost $100 billion a year, many of which would be resolved by a smart grid. This will be a future investment that will pay off over the coming years.

Tomo Says:Did SixLinks help you out? Return the favor by becoming a supporting member!
Feedback/Bugs