Most energy comes from power plants that produce toxins, including greenhouse gases. We have been using the same sources for energy and same system for distributing it for over a century. Unfortunately, over that time, we have begun to realize that there are some dangers in keeping things as they are. Most of our energy comes from sources that are damaging to the natural world and to our own health. The issue is only being made worse by the large increase in demand that is being seen already and that is forecasted to keep growing in the future.

The biggest problem is Climate Change
The biggest problem is Climate Change. Burning fossil fuels emits CO2 that had been stored deep underground and puts it into our atmosphere. This, along with some of the other byproducts, contribute to climate change, which, among other things, threatens natural spaces and those plants and animals living in them and could lead to rising sea levels and an increase in disease. 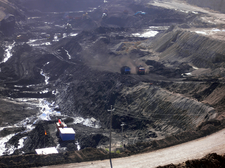 Coal mine in Mongolia. This is not a sustainable or clean energy source.Credit: Everystockphoto.com
In addition to climate change concerns, most of the ways that we produce energy now cause other pollution as well. This includes things that contribute to smog, acid rain, and that are carcinogens. These harm humans and the rest of the natural world. Even if it weren't for climate change, these still aren't the best or cleanest ways to be producing energy.

In addition to pollution concerns, there is the cost and environmental damage involved in consuming a finite resource to produce power. One of our primary focuses needs to be on things that are renewable and sustainable, things that can be done over and over again without harm. Mining coal or drilling for oil or natural gas are not things that can be done forever. Not only that, but they are going to become more expensive as time goes on, both because of resource limitations and because more and more of the world is beginning to Put a Price on Carbon emissions.
Up next: Where we are

Tomo Says:Have our guides helped you take actions in your life? Consider helping us out as a supporting member!
Feedback/Bugs