There are some places around the world where clean energy technologies have begun to become a bit more popular. France runs on almost 77% nuclear power and Spain runs on 43% wind, for example. The world, however, still relies on dirty, carbon-rich fossil fuels. Even among renewable energy, most of the world's installed capacity is in the form of hydro power, which is limited in the places it can exist and has a whole host of other environmental problems with it. As you can see from the graph below, most of the world relies on coal, natural gas, and petroleum.

Clean energy technologies are starting to increase in popularity 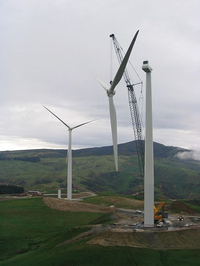 A wind turbine from the Te Apiti Wind Farm in New Zealand being assembled. We are seeing a lot of new renewable energy systems being installed latelyCredit: Wikimedia Commons
As we said, clean energy technologies are starting to increase in popularity, they are just not making a huge impact yet. Global wind capacity increased up 29% in 2008. Solar capacity went up 51% in 2007. The problem is that total energy demand also keeps going up and increases in wind and solar are not able to have the impact they should. A part of this is due to the fact that our grid is in most cases so old an inefficient that it can't handle these new clean energy technologies. We also lack the large scale storage to properly take advantage of wind and solar, which may not be producing the most energy during peak demand times. It is also being looked at to reduce peak demand and reduce the number of new power plants that we need to build to meet increases in global demand.

There is fortunately a lot of impetus pushing towards more clean energy technologies. Countries all over the world are making commitments to installing large clean energy projects and smart grids and there is a growing recognition that large scale energy storage is something we need to figure out sooner rather than later.
Up next: Where we need to be
Nuclear Energy Institute - World Statistics
Nuclear energy statistics from around the world.
Click now to view
FreeRepublic.com - North American Windpower
North American Windpower press release about Spain's record wind penetrance
Click now to view
World Wind Energy Association
World Wind Energy Report 2008. Released February 2009.
Click now to view
World Watch Institute - Solar 2007 Review
Review of the increases in the solar market in 2007, written in May 2008.
Click now to view

Tomo Says:Badges are cool. You can earn them for doing good stuff in the world!
Feedback/Bugs