The short answer to where we should be is back to where we were before we started emitting all of this carbon into in the air. Realistically, there is no way we are going to ever get back to that point. So instead, we need to get greenhouse gas levels as low as we possibly can. This will involve using less energy, using clean energy, stopping deforestation, driving less and better vehicles that produce significantly fewer emissions. 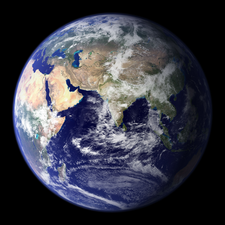 Climate change could drastically change the entire planet. We need to limit the damage it does by reducing our greenhouse gas emissions.Credit: Wikimedia Commons
There are a lot of estimates of what happens at various greenhouse gas concentrations, but because of the complexities of the climate, it's hard to have trigger points at which certain things are going to happen. We can make generalizations, but in short, we need to get greenhouse gas emissions as low as we possibly can.