The fact that climate change is occurring is not under debate
While certain regions getting warmer or cooler isn't a big deal for us (we can move, or put on an extra coat), it's life-or-death situation for other creatures living in those places. Whole chains of life are built on creatures that can't deal with temperature change (and don't have coats or sunscreen). If temperatures or weather overall changes too much for those key creatures, many more species that depend on them can quickly die off. 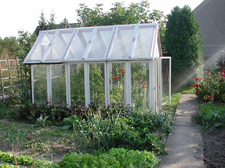 Climate change is caused by CO2 and other greenhouse gases. Adding these to the air traps heat in the atmosphere and can cause drastic changes to climate.Credit: Wikimedia Commons

Climate is the average temperature, humidity, precipitation, days of sunlight, severe weather events, etc. that occur within a certain region. This is to be distinguished between weather, which is the daily state of the atmosphere and is highly unpredictable and unstable. There are a huge number of forces that act to affect a region's climate, but in general, making large changes to a single element, such as greenhouse gas levels, is likely to have large and unpredictable consequences.

The biggest Climate Change report, the IPCC report noted that that the ultimate form climate change will take isn't very predictable and will likely be different in different areas because of these complex interactions. There are a number of possible climate futures laid out in the report, but the fact that climate change is occurring is not under debate, only how these changes will present themselves and what their effects will be.

The terms "Global Warming" and "Climate Change" are often used interchangeably to describe a climate crisis caused by an increase in the release of greenhouse gases from human activities. However, there's a distinction between what these two terms actually mean that's important in understanding what the climate crisis is actually about.

Global warming is an overall warming of the planet based on average surface temperatures, whereas climate change is a change in many regional climates, including factors such as temperature, humidity, rainfall, wind, and severe weather. Global warming properly describes some of the major problems associated with our climate crisis, including heat waves, droughts, floods, melting glaciers, melting snow caps, and a rise in sea levels.. However, climate change is becoming increasingly popular in the scientific community because it stresses that there are other problems besides warming going on and that the problems are often regional changes, not global averages. The primary problem is that local climates are changing and are changing so quickly that it may not give the species that live in those regions time to adapt, making the regions uninhabitable and killing off the species that live there.